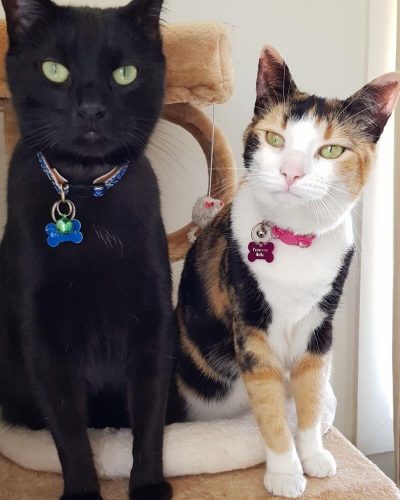 If this were an American high school, this pair would be the Homecoming King and Queen. Despite being siblings, they’re the ultimate Insta power couple, living a selfie-worthy life in Grafton, AU.

From humble rescue roots, they were adopted by their hooman at just 2 months old. Now, they’ve swapped shelter life for their Sunday best, truly believing you can never be overdressed or overfed – to paraphrase Oscar Wilde.

But make no mistake – this pair haven’t forgotten who they really are. They used to have a little now they have a lot (of followers), but no matter where they go, they know where they came from – yep, they’re still they’re still Milly and Mr Penny from the block.
Gentle giant Mr Penny weighs in at a whopping 10kg, but he knows he’s worth more than the number on the scale – a real inspiration to cats of all shapes and sizes. Insta princess Milly works those angles and knows how to catch the light at golden hour for that perfect glow.

You’ll find the pair posing in an impressive collection of fancy dress, Mr Penny working his biceps on the climbing tower, and Milly keeping active on her harness.

Contact us to collaborate with Milly and Mr Penny.