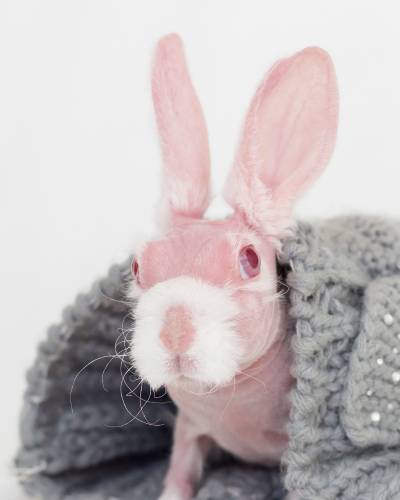 When people say Mr Bigglesworth is one of a kind, they really mean it. This little guy was born with a rare genetic condition that has made him a hairless hero for all the extra special pets out there!

Named after the hairless cat in Austin Powers, this guy was destined to have a crazy life! Mr Bigglesworth hopped to fame after appearing all over the media in his Birthday Suit and winning the hearts of people everywhere! His mission is to put his good looks (and lucky feet) to good use and give every under-dog, cat, rabbit, hooman the opportunity to feel special. By his side is the apawable Paris, his Whipper sister. Paris uses her paws for a cause and is a role model and ambassador for our more anxious furry friends.

Mr Bigglesworth may be little but he’s making some big moves, and we’re all watching! Watch out Bugs Bunny, there’s a new guy in town and he’s a star!

If you’re liking the look of Mr Bigglesworth, hop over to our Contact page.