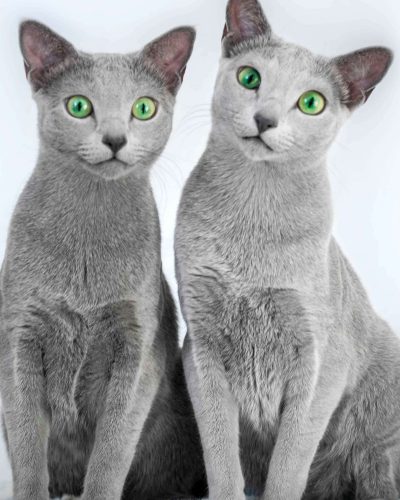 Yanks living across the pond in the UK, Xafi and Auri are American Type Russian Blue Cats – not to be confused with their far less majestic Scandinavian and British counterparts, mind you. Dazzling their 120k+ strong following with their piercing green eyes, enigmatic smiles, lean build and glossy fur that has Victoria’s Secret models begging for their secrets, Xafi and Auri can be found perfecting their poses and pulling twin tricks on their human. They’re not true twins, but share a seventh sense.

Rumoured to be the four-legged cousins of the Kardashians, this duo come from a star-studded family of Insta famous felines. Yep, their little brofur @errol.the.cat has gone full Solange Knowles and shot to stardom in his own right.

Find them on Instagram showing off their signature chirp, and giving the Insta-dogs a run for their money when it comes to playing a fiery came of fetch. Advocates of #CatEquality, the pair believe felines are just as playful as dogs (ahem, better in fact). What’s more, they’re leading the charge in putting an end to cat dress up. These velvet-soft beauties prefer to shake what their mumma gave them – you won’t find these Russian Blues dressed up as pumpkins this Halloween, but they’ll happy pull their best Mariah pose instead.