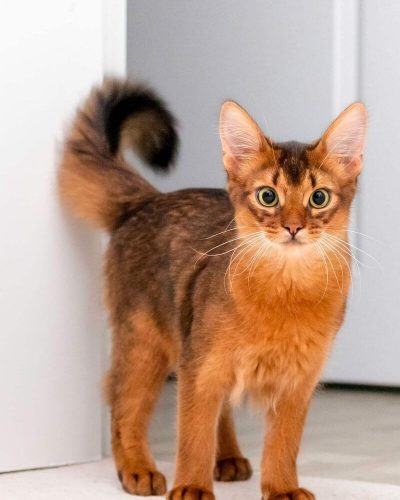 Is it Solange Knowles? Is it Kylie Jenner? Nope, but it’s another younger sibling proving that the littlest is always the mightiest – it’s foxy feline @errol.the.cat, younger brofur of Russian Blue sensations, @xafiandauri.

Yep, that’s a lot of fur talent in one family. But Errol has nothing to prove – he’s a brother from another mother, and proud of it. This bushy tailed firecracker plunged into the spotlight in July 2018, when he joined his famous feline fam, and he’s not going anywhere. Despite @xafiandauri’s twin thing, collectively they believe it actually takes three, baby.

Known by friends and fur fans as Errol, this dark horse’s official title is Goodboy Bindle Featherstone of Quirm – that one’s for you, Terry Pratchett fans. Although, when it comes to Mondays, GBFoQ is anything but good. Find him on the ‘gram with his bushy tail up in their air like he just don’t care, and guzzling the good stuff from his collection of lavish in-house water fountains. Many say they’re the crystal chandeliers of the cat world.

To get a dose of Errol, get in contact with us.

This website uses cookies to improve your experience while you navigate through the website. Out of these, the cookies that are categorized as necessary are stored on your browser as they are essential for the working of basic functionalities of the website. We also use third-party cookies that help us analyze and understand how you use this website. These cookies will be stored in your browser only with your consent. You also have the option to opt-out of these cookies. But opting out of some of these cookies may affect your browsing experience.
Necessary Always Enabled

Any cookies that may not be particularly necessary for the website to function and is used specifically to collect user personal data via analytics, ads, other embedded contents are termed as non-necessary cookies. It is mandatory to procure user consent prior to running these cookies on your website.